1. I downloaded the installer to update my previous version to the latest. I hadn't thought about exporting any settings as I was eager to try out the new version. Upon installing (and overwriting) in the previous version I was surprised to see everything I had set up in Options - 'Technical details", "Tile effects", Background etc were all reset. Even the Special Matrix I had chosen had been returned to default state. It would be nice if when installing new versions over older versions, that settings/options are not overwritten and can be kept as we had set them. Perhaps also a "Master settings export/import" feature that puts everything into a single file as a backup just incase.


2. When I went to install the program, the default installation directory was D:\Program Files\Video Thumbnails Maker. Why is it defaulting to my D drive? Surely most people will be installing to C:? C is my active OS drive and where I install all my programs to. On a side note, D used to be my old C drive/boot/OS drive. It was running Windows 7 32bit. I never properly formatted the drive. When I upgraded my PC and put an NVMe drive as my C, I simply moved the old hard drive to D. The old Windows 7 installation is still on it however the motherboard BIOS has been made to ignore booting from that drive so it doesn't have any conflict. The Windows 7 version isn't even 64 bit (which if it was, might have been an explanation as to why VTM was confused upon installation) and given that I am installing the 64 bit version of VTM, I would think it would consider program files folder in the C drive to be the best option given that Windows 10 on my C is actually 64 bit version?


3. WMV file handling. Is there a reason why the timestamp on a WMV thumbnail sheet shows as -02:-48:-05 on each and every thumbnail? I've experienced this with many WMV files. There is no seeking/playing issue with the file on the PC. Even though the thumbnail sheet shows the correct intervals for each thumbnail, the associated timestamp is not correctly displayed. I simply dragged the WMV file into the main window then clicked "Start". Since I wasn't happy about the thumbnail choice, I decided to do a manual selection. Here is the outcome; 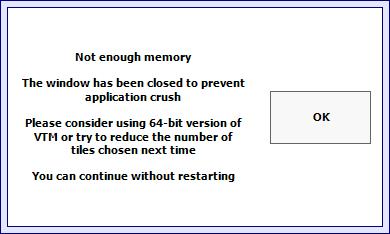 
6. In the Environment section, I feel the listing of the engines should be such that the Ultimate engine should be before Crystal. Since we read from left to right and therefore the most important thing should be listed first and then go down in ascending order, the flow should look like this; 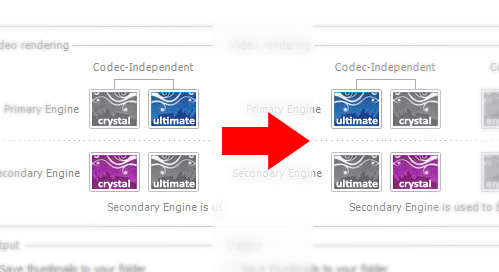 7. I know you mentioned the vertical scroll bar is fine in "Choose shots manually" but it still bugs me that it is there given that it wasn't there in v14.2.0.0. and earlier. Obviously something is causing the scroll bar to be there based on the window size. The only thing I can see is the mouse controls/help info. How about moving that to under the "keyframes only" button since there seems to be space there to see if that removes the scroll bar? Also the "drag and drop is working" line seems redundant. Everywhere else in the app, help points appear as a pop up when you mouse over so maybe move these into a mouse over popup? Or add a HELP button somewhere in Choose shots manually window so the information can appear in a popup? This way in the future, if you need to add more helpful tips, you have a dedicated area for help.
Top

1. It shouldn't. VTM load deafault Options and Settings in 1 case: VTM failed to load the from Windows registry. Most likely that is because the insufficient privileges to read the registry branch.
You can find something like "VTM can't load Options" entry in that case in the log file (right after the issue).

2. Disk C is a special Windows disk. When you want to write on Disk C (except special folders like (c:\Users\<username>\AppData\...) you need to escalate privileges. I do not want to ask for privilege escalation so I prefer to avoid installing VTM, Videonizer and PTM to disk C when possible.When disk D is available, the program suggests to install on disk D. If only C disk is present, the program suggests %USERPROFILE%\AppData (c:\Users\<username>\AppData\...).
In that case you will never be asked for privilege escalation.

I will check the possibility to use C:\Program Files... and keed Log files in %USERPROFILE%\AppData (c:\Users\<username>\AppData\...).

3. I have a lot of wmv files and all of them are processed correctly.
Could you please share an example to test?

4. Will be corrected, thank you!

6. Never thought that could be important. Ok, I can switch position

7. Ok, I will increase the size of the window a bit.
Top

I didn't report that, but I was having the same issue as the original poster. So I'm gonna provide some feedback.
New version handles about 80% of WMV files correctly. But some old WMV files still have "-02:-48:-05" timestamp issue and "no seeking/playing" issue.
Last edited by Xephon on 11 Sep 2021, 15:59, edited 1 time in total.
Top

Can I have an example of such file in private messages?
Top

Did you get my PM?
Top

DimsumDynamite wrote: ↑
06 Jun 2021, 17:32
3. WMV file handling. Is there a reason why the timestamp on a WMV thumbnail sheet shows as -02:-48:-05 on each and every thumbnail? I've experienced this with many WMV files. There is no seeking/playing issue with the file on the PC. Even though the thumbnail sheet shows the correct intervals for each thumbnail, the associated timestamp is not correctly displayed. I simply dragged the WMV file into the main window then clicked "Start". Since I wasn't happy about the thumbnail choice, I decided to do a manual selection. Here is the outcome;

Timestamp and seeking issues have been resolved.
But playing now goes at like 20x speed. And not only for WMV but for all file types
Top

Most likely that is because the "Keyframes only" mode is ON. Try turning it OFF to see the difference.
Top
Post Reply
11 posts

Jump to
Powered by phpBB™ • Design by PlanetStyles